Good Morning Mousekateers! I hope you're all enjoying the first official lazy Sunday of summer!
The following is a fantastic review of World of Color by my friend, Kelly. You'll also be able to find this in the Reviews section along with her other tremendous reviews of various restaurants she visited while  on her recent trip to Disneyland. You can find her blog, Brownies and Zucchini here. Be sure to check it out!
--------------------------------------------------------------------------------
Since I had just been to Walt Disney World last year (almost exactly 6 prior, actually) going to Disneyland while I was in southern California wasn’t really a priority.  I had heard that there were very few things that were different than Disney’s Florida counterpart and as much as I would love to experience that again, it seemed like it may not be worth the money to go so soon after.  When my husband asked me if I wanted to go, I was kind of on the fence.  If we had unlimited money, of course I would go, but I had thoughts that maybe it could be spent on some other kind of entertainment.
Then, by some random coincidence, Mandy did a post on this site about The World of Color.  Or maybe she was secretly hoping I would go to Disneyland while I was so close.  That post convinced me that it would definitely be worth our time and money to go down to Anaheim for the weekend.
This trip to Disneyland was not like anything I have done before.  There was no planning (we literally decided and reserved our hotel the night before).  I am a big planner - especially when it comes to Disney.  Food, rides, tips, and tricks - I want to make sure my time is spent the best way possible! Going into this trip, I felt like I knew nothing.  I knew that there were a couple of things that were different and new from the last time I was at a Disney Park, and that was about it. I had no idea of the best way to do things - and that kind of scared me.
When we got to the parks bright and early Saturday morning, we checked out the maps, wait times for our “must do” rides and attractions, and show times and went full force into Disneyland!  One of the things that was on my “must do” list was World of Color.
If you are not familiar, World of Color is a nightly how that occurs on and over Paradise Bay at Disney’s California Adventure.(DCA)  We headed over to DCA early Saturday afternoon to check it out and see what we were going to be looking at that evening.  We knew from our experience with night shows at other parks that there is often places that are better than others to see the show.
As we walked into the park, we noticed a sign that pointed us in the direction of where to get a Fastpass for World of Color.  I was a bit confused.  I had never seen a Fastpass for a show. But, since we knew that it was something we definitely wanted to do, we followed to sign to get our fastpass.  When we got the ticket, it was for the 10:15pm show and we were instructed to show up between 9:15 and 9:45 at a location near Paradise Bay - but not right on the bay.  Hmmm....gettting there an hour before the show, when there was an earlier show is kind of weird, but we just went with it.
We hadn’t planned on getting there super early, but it just worked out that we ended up getting to our designated spot at almost exactly 9:15pm.  There was already a HUGE line.  Apparently they line you up to get ready until the first show is over, and then they corral you into your designated spot near the bay.  At this point, I realized that there were cast members guiding people into all different areas around the bay - but they all had fastpass tickets.  So....you HAD to have a fastpass ticket to see the show? That can’t be right.  Afterwards we looked online to see what the deal was, and it turns out that Fastpass is pretty much necessary to see this show but there are a few areas that you can stand if you don’t have a ticket.
Well, after an hour long wait in line and walk to the bay area, I was definitely ready for the show to start! And then it began.  And let me tell you, it was worth the wait. 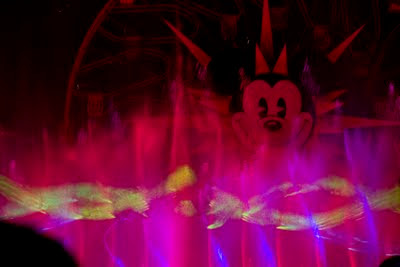 World of Color is an amazing experience.  If you are familiar with the fountains at the Bellagio in Las Vegas, it is like that on steroids with some Disney magic. There was not only streams of water, and colored streams of water, but there was also images of Disney movies projected onto sheets of water over the Bay.  So cool.  I really enjoyed that they used images from a large variety of Disney movies as well!  Everything from Toy Story, Up and Wall-E to Bambi, Lady and the Tramp, Fantasia, Tangeled, Beauty and the Beast, and more! They have even added some Pirates of the Carribean scenes! 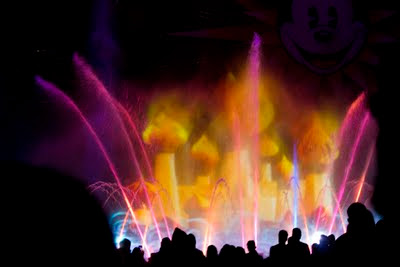 The colors were beautiful, the water show was awesome.  There were lasers.  And fire.  And did I mention that it is all set to music?  Yeah, pretty cool. 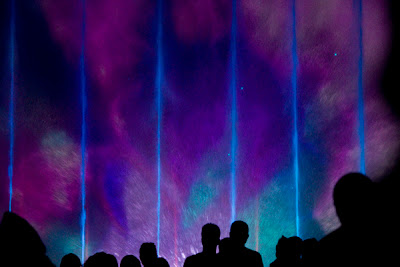 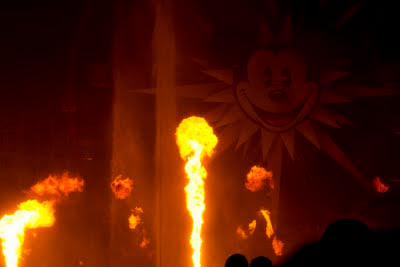 Overall it was a wonderful experience and I am so glad that we went and saw it while we were in the area!   I definitely recommend setting aside some time to see this show if you are at Disneyland!
Posted by Mandy at 10:17 AM

Listen while you read!

Disney on the Interwebs